Cingoli 62011 (MC) Italy
We receive only by appointment 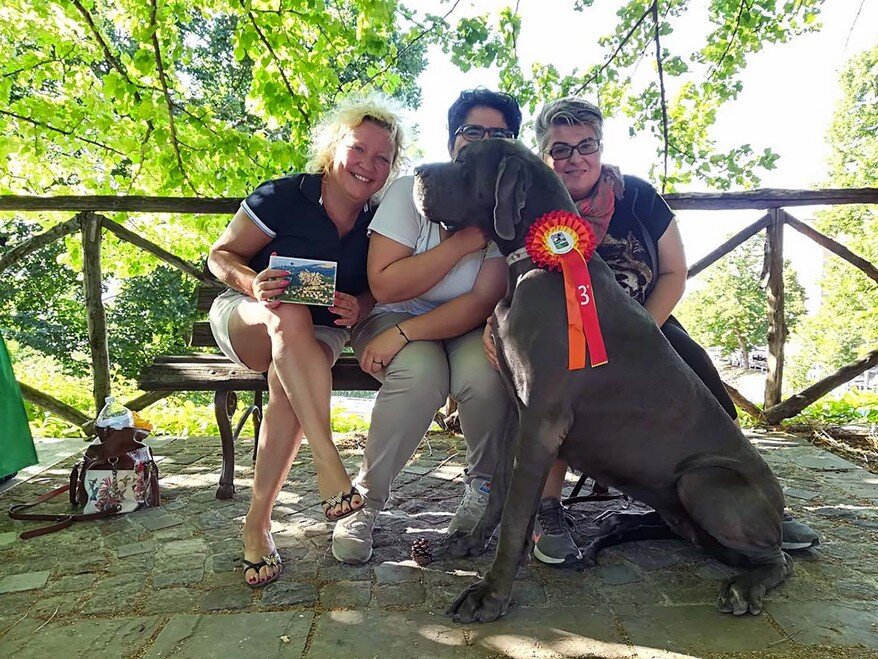 "Coming together is a beginning. Keeping together is progress. Working together is success.." (H. Ford)
From left, Ornella, Irene, Tuula & Carla ... a team that has managed with extreme dedication, passion and sacrifices to bring Tuula to become the first European and World champion ... MADE IN KERATON!

Welcome to our site!
I am Carla Carletti, owner and founder of the "dei Monti del Keraton" kennel,  under which I have selected great danes since 1996 in black, harlequin and blue colors and since 2010, fawn and black pugs.
My history with great danes began at the age of 15, when I asked to my parents as a gift,  the same dog to the one that had conquered my heart and mind, leafing a dog magazine: it was the Great Dane! 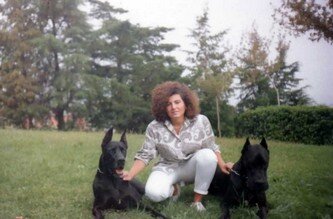 Carla with her first Great Danes 1989
This passion, which over time conquers me more and more, materializes in 1994 with the purchase of the first dogs and bitches that gave birth to the amateur "Keraton" Kennel, among which I remember Rena Indios dell'Armida, Libertin de la Benjamine, Tundra Indios dell’Armida and many others.
The desire to attend dog shows, to select beautiful and healthy dogs that meet the standard as much as possible and the numerous titles obtained in a short time, allowed me to obtain the affix in 1998: "Dei Monti del Keraton" recognized by Enci and FCI.
The goal has always been to select and breed, for the sake of the breed, morphologically typical and correct dogs, with a balanced character and free, as much as possible, from hereditary defects; for this reason my subjects are radiographed for hips dysplasia (and in recent years also at the elbows) even if in Italy it is still not mandatory.
The numerous results obtained in these years by attending Italian and foreign dog shows, the export of numerous subjects that have become part of prestigious kennels in Europe, Asia and America, lead me to believe that the way I am following is the right one.
Over the years I have produced numerous champions, mainly in the colors black, harlequin and blue, so we can count: 40 Italian Champions, 18 International Champions, countless Club Champions across Europe, 18 Social Champions, 7 Reproductive Champions, EuDDC Champions, 3 Young European Champions (Brutus, Barynia, Beverly), 1 Young World Champion (Meredith), 4 European Champions (Emma, ​​Goya, Gemma, Tuula) and 1 World Champion (Tuula) all of them under the “Monti del Keraton” affix. 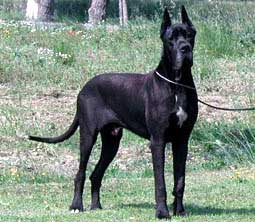 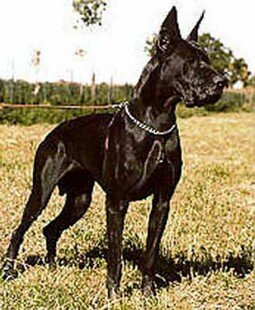 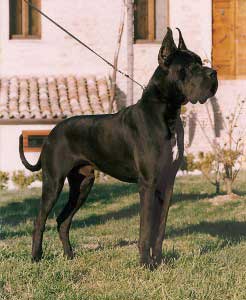 Ch. Brutus “dei Monti del Keraton” one of the first champions born in the kennel 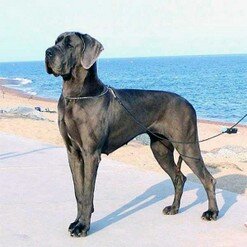 Ch. Gemma dei Monti del Keraton, one of the best females of all times, some judges had define her like “ a female without defects”. 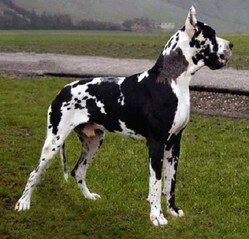 Ch. Goya dei Monti del Keraton, one of the most winning harlequin males from the first half of 2000. 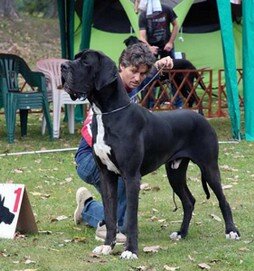 Ch. Olimpiodoro dei Monti del Keraton, a really tall black male that with his victories on the show ring and his talent as reproductor, let all Europe speak about him, between his sons there is the BIS at Nationale d’Elevage 2016: Ch. Hokinawa du Paradise de Geants.
In recent years a young girl, at that time she was sixteen (and with the same passion that I had at her age) prefers to spend her free time in my kennel, helping me in every aspect in the daily routine and not only, learning all that I have been able to teach her very easily, at the point of becoming a basic and fundamental point in the continuation of the breeding, with the desire to enrich her knowledge and her cynologic baggage, by now a fundamental and irreplaceable presence for me. But now I let her present herself … 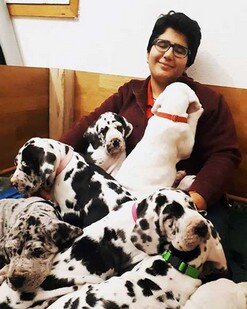 Irene with the “W” litter
My name is Irene and since 2011 I have been collaborating with Carla in all aspects related to this prestigious kennel, but let's go step by step ...
My passion for animals is innate and for dogs absolutely immeasurable since childhood. Being the daughter of a veterinarian, animals have always been present in my life and the first purebred dogs were German shepherds, Irish setters and huskies. My great luck was that my father and Carla had known each other for several years, for another common passion: horses!
When one day my father took me to Carla's kennel, I would have been 10 years old, I remember being shocked to see almost 40 Great Danes all together ... love at first sight!
Years later, more precisely on February 23, 2011, due to a strangely fortunate set of coincidences, I returned to Carla to accompany her to the Ancona dog show and when I got out of my father’s car, two black females came out of the pits with their ears cut off which remained motionless for 10 minutes staring at me ... I shivered and I was speechless ... second and final love at first sight! On theshow ring that day, we brought dogs that would have been the stars of the exhibition and reproductive scene of the following years in Europe, they were Olimpiodoro and Nijinsky dei Monti del Keraton, unforgettable dogs and that made me enter even more into this particular world that is that of dog lovers and that made me more and more passionate about dog shows!
In recent years I have toured Europe with the Keraton Team, known many people and dogs until then seen only in photos. I had great satisfactions in bringing in the rings and winning with these giants, starting from Olimpiodoro, passing through Olivia, Rahima, Rohdiamant, Rashid, Seth, Sanja, Ursula even if, I must say, the dog that most of all gave me immense satisfactions in the ring was Tuula, the first World and European champion of Keraton kennel!
My greatest satisfaction is to see them born, grow, prepare them physically and mentally in the ring where I try to enhance their personal characteristics, lead them and, why not, every now and then win with them, always with the maximum respect for everyone and with honesty! 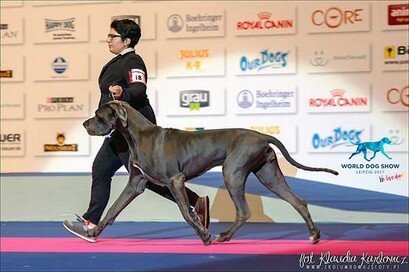 The Ch. Tuula dei Monti del Keraton and Irene on the honor ring at World Dog Show in Lipsia (D) after winning the Best of Breed on 116 blue great danes. 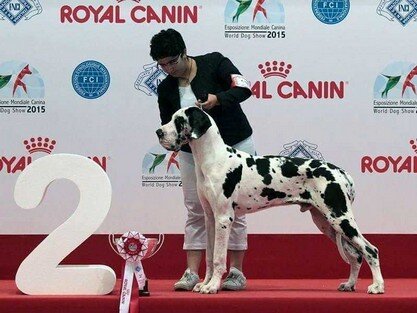 The Ch. Seth dei Monti del Keraton and Irene on the honor ring of World Dog Show 2015, they are running to Reverve Puppy Best in Show. 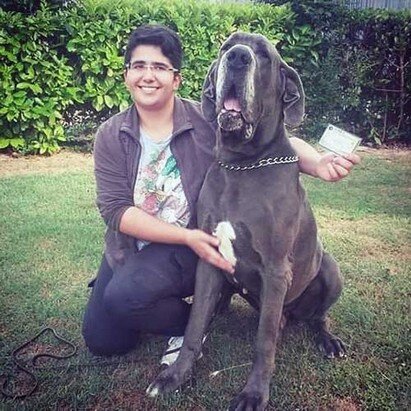 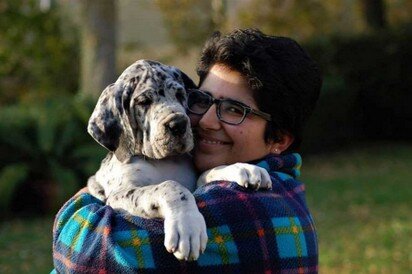 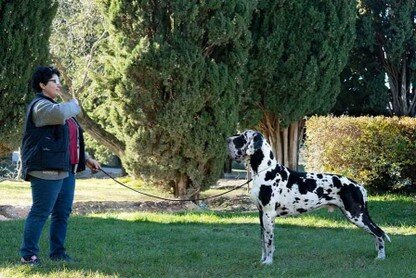 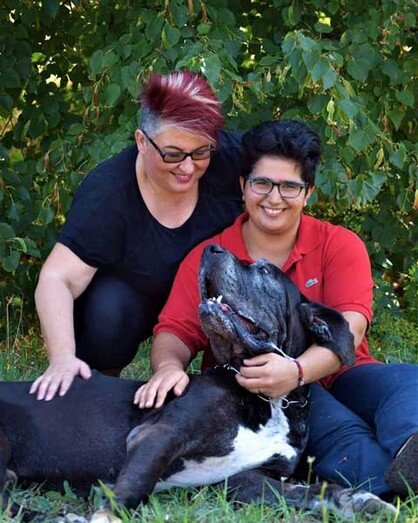 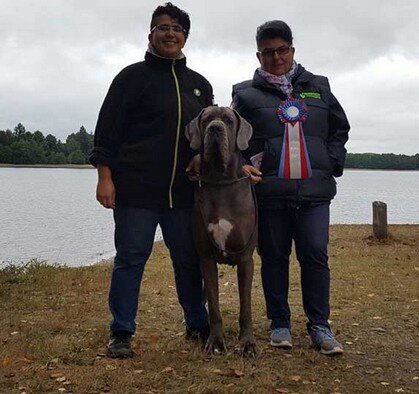 t is our way of being, of living our dogs and let livng the great dane.
It is our way of breeding and relating to our extended family of quadrupeds and new owners from all over the world.
It is synonymous of Love, Passion and Professionalism.
Torna ai contenuti